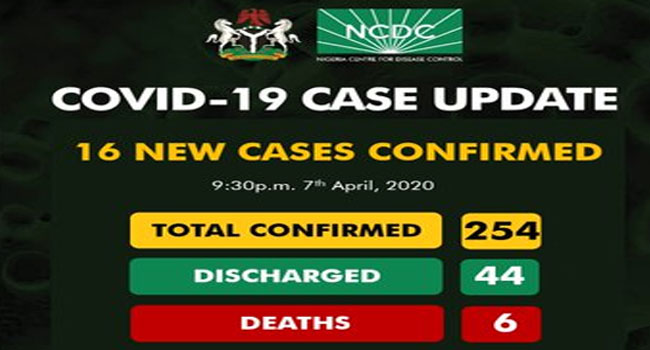 Nigeria has recorded 16 new cases of coronavirus, bringing the total number of COVID-19 infections in the country to 254.

The Nigeria Centre for Disease Control (NCDC) disclosed the updated figure which rose from 238 in a tweet on Tuesday evening.

Ten of the new cases were discovered in Lagos and two infections were confirmed in the Federal Capital Territory (FCT).

As at 09:30 pm 7th April there are 254 confirmed cases of #COVID19 reported in Nigeria. Fourty-four have been discharged with six deaths 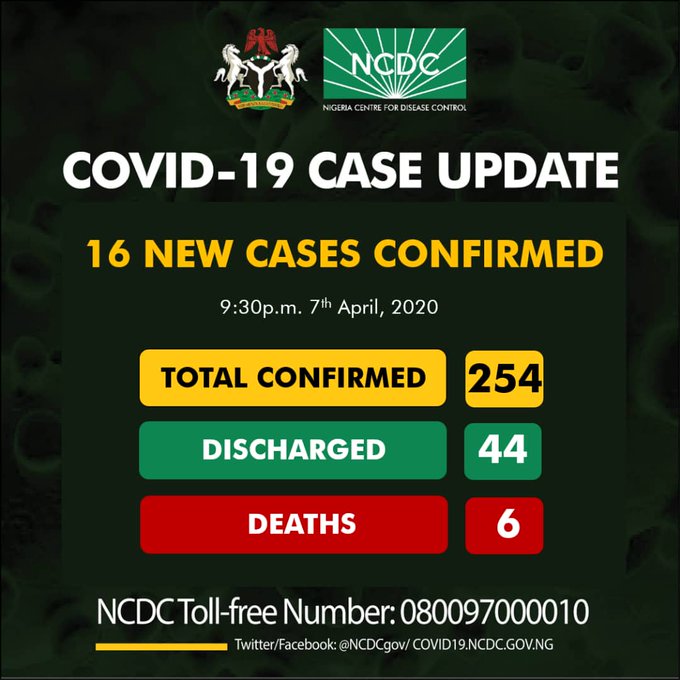 As of 9:30pm on April 7, the NCDC stressed that the country recorded a new death – total at six – while 44 people have been recovered from the disease and have since been discharged.

The latest fatality from the disease was recorded in Daura, a town in Katsina State.

Channels Television had reported that the victim was a medical doctor identified as Dr Aliyu Yakubu, who based in Daura.

Yakubu, according to Governor Aminu Masari who briefed reporters earlier at the Government House in Katsina, died on Saturday last week.

He passed just days before the NCDC confirmed that he had been infected with coronavirus.

The doctor was hospitalised at the Nigerian Air Force Reference Hospital for about two hours before he died, following his return from a trip to Lagos.

On his way back, he was said to have stopped in Kogi State – his home – where he spent two weeks before returning to Daura.

As part of measures to contain further spread of COVID-19 in Katsina, Governor Masari had directed that all Yakubu’s contacts be identified by health officials from the state Ministry of Health.

He also asked that their blood samples be collected for laboratory testing between Tuesday evening and Wednesday.

See the case updated summary of COVID-19 in Nigeria below: