Goods worth millions of naira on Tuesday morning went up in flames as fire burnt down a section of the multi-million naira Ogbe-Gonogo market in Asaba, the Delta State capital.

“Many traders are currently using their teeth to count their loses as the fire razed shops and goods along the Nnebisi road. The first State fire service truck that came to rescue the situation ran out of water while the fire was still on.

“As at 9:26am, the fourth fire service truck arrived while Good Samaritans were serving water from the gutter to quench the fire but to no avail”, the report stated.

Angry traders according to the report, almost lynched a police officer at the scene as people were scampering for their lives and trying to salvage their goods but were prevented from having a free-for-all.

The cause of the fire is still sketchy according to the report, however, a trader in the market blamed it on an electrical fault which sparked the fire outbreak from a section where mobile phones and accessories are sold.

It was further disclosed that the fire spread ostensibly because of the closeness of shops to one another, a development which the source said made it difficult for the fire fighters to gain access into the market to battle it.

Chairman of Oshimili south local government area, Comrade Uche Osadebe who later came to the scene, had demanded for the services of an excavator to clear the burnt shops to enable the fire service truck gain access into the market in order to put off the fire completely.

Contacted, the Police Public Relations Officer (PPRO), DSP Onome Onovwakpoyeya, said the police and personnel of the state fire service are on top of the situation.

Asked if there was any lost of life and the possible cause of the fire, the police image maker said: “I wouldn’t know for now, the police and fire service personnel are managing the place.

“Right now it is all about getting things under control; as in putting off the fire and making sure that no life is lost”. 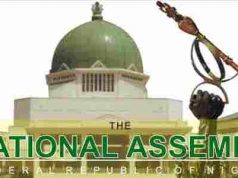 May 29: Elumelu Hails Okowa For Bringing About A Stronger Delta