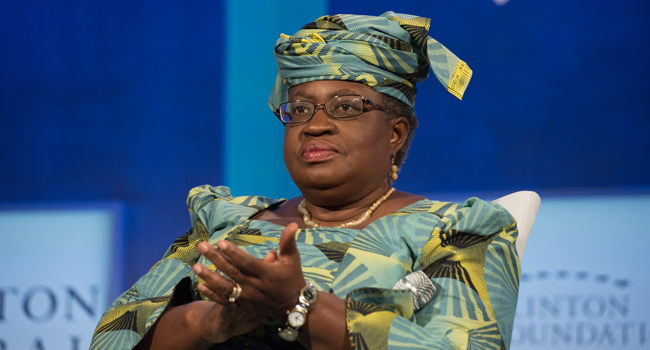 Nigeria’s Ngozi Okonjo-Iweala is still in the race of becoming the next Director-General World Trade Organisation (WTO) even after the international body reduced the number of candidates to five.

WTO in a Tweet on its official handle @wto on Friday announced that the five “candidates will be moving on for members’ further consideration in the next round of consultations, which resume on 24 September.”

Selecting the next WTO Director-General: These are the candidates moving on for members’ further consideration in the next round of consultations, which resume on 24 September. Find out more here: https://t.co/6dA7siuFsa #WTODG pic.twitter.com/VAhPxQ2GtX

Explaining further on its website, WTO said the five candidates were chosen from eight others after due consultations.

“The WTO took another step towards selecting its next Director-General today (18 September) as General Council Chair David Walker of New Zealand and his two co-facilitators in the selection process disclosed which of the eight candidates had secured the broadest and deepest support from the WTO membership and should consequently advance to the next stage of the process.

“In consultations with Amb. Walker, Amb. Dacio Castillo of Honduras and Amb. Harald Aspelund of Iceland, WTO members indicated that the five candidates who should advance are Ngozi Okonjo-Iweala of Nigeria, Yoo Myung-hee of the Republic of Korea, Amina C. Mohamed of Kenya, Mohammad Maziad Al-Tuwaijri of the Kingdom of Saudi Arabia, and Liam Fox of the United Kingdom.”

Walker adds that the second phase of consultations will begin on September 24 and run until October 6.

Okonjo-Iweala is Nigeria’s former minister of finance and former Managing Director of the World Bank.

She has behind her the support of her country.

Members House of Representatives in July 2020 also endorsed her, describing her as very qualified for the job of WTO DG.