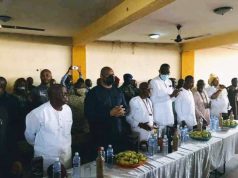 Delta 7th Assembly 1st Anniversary: Speaker says they are out to give Deltans a...