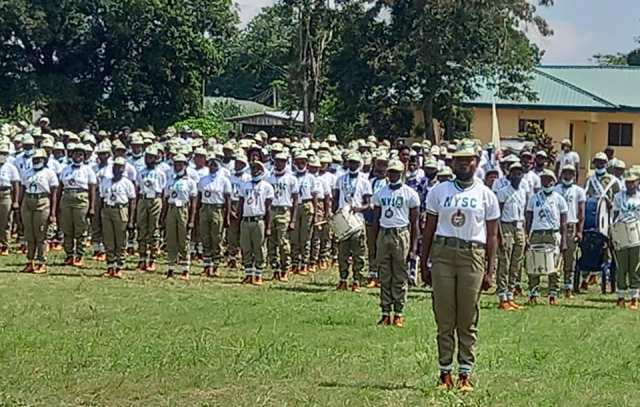 A total of 1500 corps members deployed to Delta State have been sworn-in as camp officially opened at Issele-Uku Permanent Orientation Camp with swearing-in ceremony on Friday 21st May, 2021, for Batch A Stream 2.

According to a report by Patrick Ochei, the State NYSC Coordinator, Mrs. Olutayo Samuel said Camp was opened on Tuesday 18th May, 2021 with check-in and registration of prospective corps members.

Mrs. Samuel said the Orientation Course, which is the first cardinal programme of the NYSC Scheme, will last for three weeks.

“It’s designed to inculcate in the corps members the ideals and objectives of the one year national service as well as model them for the challenges and their role expectations during the next one year”.

she congratulated those who scaled through their academic qualifications from various higher institutions, advising them to take the one year programme seriously in the interest of building solid future for themselves and advancing national unity and cohesion.

The Director in charge of NYSC South-South Area office, Mr. Abdulrasheed Sanusi also congratulated the corps members and reassured them of adequate mental and moral training in line with the rules and by-laws of NYSC.

He said Orientation Course is significant in NYSC, providing the platform to communicate the opening of the camp officially by the Director General.

“Swearing-in means so much to the NYSC. Apart from welcoming the corps members officially to camp, we communicate officialdom to them about what we do in NYSC”, Mr. Sanusi affirmed.

The administration of oath of office was performed by the Chief Judge of Delta State who was ably represented by Honourable Justice M.O. Omovie, while the Obi of Issele-Uku Kingdom, HRM Agbogidi Obi Nduka was the Royal Father of the Day.

Meanwhile, all corps members, NYSC officials, dignitaries and visitors were made to adhere strictly to the Covid-19 protocols.

Also, the birth of a new baby at the camp by a corps member, Kume Helen (DT/21A/2119) was prominently celebrated.

I Will Rejuvenate WTO —Ngozi Okonjo-Iweala