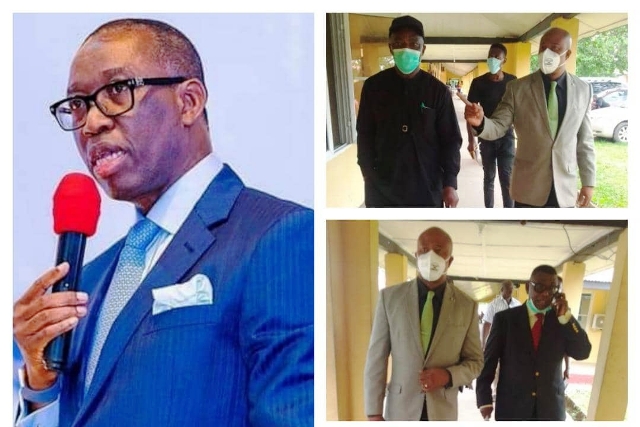 Having toured round the facility with his team and top management staff of the hospital, Dr. Nwoko expressed satisfaction with the State of the facility particularly the way the free maternal and Child health care program was running seamlessly in the facility.

“Owing to available data, Nigeria is a country with nearly half of her population as young people, 46 per cent, currently under the age of 15. The current number of children under the age of 5 covers almost 31 million, whereas every year, 7 million babies are born. While a little over 1 in 3 of Nigeria’s whole population lives below the poverty line, among children this proportion surges to 75 per cent”.

“A 2016 National campaign linked to healthcare services resulted in the registration of about seven million children, but large population growth is impacting progress. Nigeria’s 40 million women of childbearing age (between 15 and 49 years of age) suffer a disproportionately high level of health issues surrounding birth. While the country represents 2.4 per cent of the world’s population, it currently contributes 10 per cent of global deaths for pregnant mothers.

“Latest figures show a maternal mortality rate of 576 per 100,000 live births, the fourth highest on Earth. Each year approximately 262,000 babies die at birth, the world’s second highest national total. Infant mortality currently stands at 69 per 1,000 live births while for under-fives rose to 128 per 1,000 live births. More than half of the under-five deaths – 64 per cent – result from malaria, pneumonia or diarrhoea. Investment in this sector has been high in recent years although the proportion of patients able to access appropriate treatment remains low,” Nwoko stated, while attributing his Source to UNICEF

He further said, “This underscores the need to ensure enactment and full implementation of health care policies such as the free maternal and child health care program  so as to enable pregnant women and children under age 5 access quality and affordable health care in order to reduce maternal and prenatal mortality.

“Delta State is at the forefront of implementing such health care policies which has enhanced the health indices of the State and notching up Universal Health Coverage ahead of other States of the Federation.

“As at 1st January, 2020, a total of 685,910 residents of Delta State have been captured under the Delta State Health Insurance Scheme, while as at 31st December 2020, a total of 835,396 residents of the State have been enrolled into the Health Insurance Scheme and they include, formal sector plan and their dependents, informal sector plan and the vulnerable group where you have pregnant women, children under age 5 and widows”.

The SSA noted that the statistics which represents a 21.8% increase in the enrollment of residents of the State into the Health Insurance Scheme within a year as well as concerted efforts being made to provide effective and efficient health care services to all enrollees shows that the State is on a trajectory and fast attaining Universal Health Coverage ahead of other States of the Federation.

The Delta State Health Monitoring Teams A and B Visited 9 health care facilities in Delta North and Central Senatorial districts same day as part of the 2021 monitoring rounds.