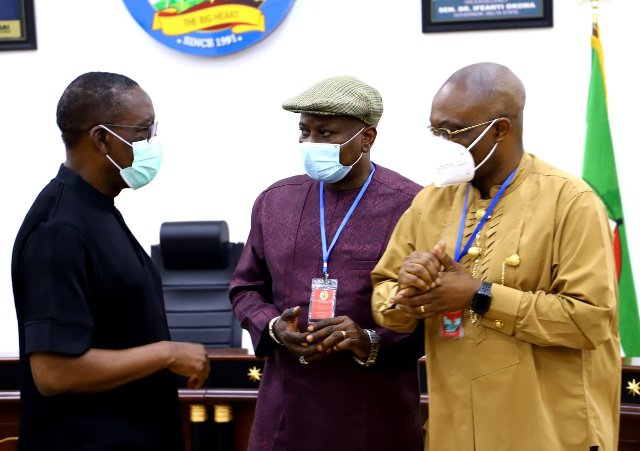 Okowa stated this when the United Nations Resident and Humanitarian Coordinator, Mr Edward Kallon and his delegation visited him at Government House, Asaba.

He commended the United Nations for its various programmes in the state, saying they had been of immense benefit to people of the state.

He remarked that human trafficking and irregular migration were being encouraged by high poverty rate in the country.

The governor, however, disclosed that his administration was checking the scourge with the establishment of entrepreneurial programmes to encourage youths to be self-reliant.

“For so long we have had this relationship between our state government and the UN in various ways and through various programmes that you have introduced in this nation and of which we have benefited as a state.

“As a state government, we have had lots of challenges these few years and Delta state has had its fair share. It was of course compounded in the last several months by the issue of COVID-19.

“It has been a very difficult time but we will continue to do our best to touch the lives of our people,” he said.

On efforts to eradicate human trafficking and irregular migration, the governor said that the state was doing its best in tackling the vices but lamented that poverty was a great factor fuelling it.

“We know that many of these things are driven by the poverty level of the people and we know the misinformation out there that there are greener pastures outside the shores of Nigeria.

“This has continued to refuel the zeal of our young ones who are misinformed that they need to leave the shores of this country.

“So we are doing a lot in trying to keep our youths engaged in entrepreneurship programmes which we believe will help them to take care of themselves and their families and retrain others.

“This will keep our youths engaged and we will have less people seeking greener pastures outside the shores of this nation. Although we are still far away from true success, we have done a lot in our various communities.

“In the past, it was believed that the government will keep employing people but this has shown to be a wrong path as it only increased recurrent expenditure.

“But, we have started carving out funds for capital development which will actually enable growth in the society.

“We are also mindful of the fact that the present crisis of insecurity may increase the human trafficking which we have been trying to eradicate.

“This is because when many of our youths feel that they are no longer safe in their country, they would want to leave.

“To a larger extent, we are beginning to let the Federal Government know that there is a need to look beyond the federal policing of our nation. It may not just be enough to take charge of the entire policing of this nation,” Okowa stated.

Earlier, Kallon had said that he was in the state to reinforce the partnership between the United Nations and Delta Government.

He said that the UN was determined to provide support for the fight against COVID-19, implementation of Sustainable Development Goals (SDGs), combating human trafficking and irregular migration.