Declaring the Public hearing open, Governor Ifeanyi Okowa expressed hope in the capacity of the Committee to handle the review of the Constitution with the utmost urgency that it deserved, noting that it has become obvious that the country cannot continue on the present path whereby the nation is alternating between cycles of crises.

He drew the attention of the gathering and the Committee to the agitations for separation from some ethnic nationalities and said that their agitations are getting louder by the day, owing largely to perceived marginalization in the existing structure. 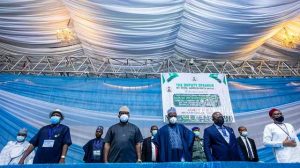 “We have to act swiftly and decisively to calm the raging storm, regain confidence in the Nigerian project, and halt the seeming drift into anarchy. We believe that the first step on the road to National redemption and cohesion is to produce a constitution that reflects the yearnings and aspirations of the Nigerian people. This committee owes this generation and future generations of Nigerians that responsibility,” the Governor stated.

Okowa represented by the Speaker of the State House of Assembly, Rt. Hon, Sheriff Oborevwori said that the Delta State Government has critically examined the proposed areas of amendments to the 1999 Constitution as amended, especially  as they relate to Fiscal Federalism, devolution of powers, state police, and local creation by states.

“After carefully considering all the salient attributes of a federal system as well as the historical antecedents relating to federalism as practiced in Nigeria, Delta State Government and its people are convinced that Nigeria should continue as a Federation but with a proper federal Structure,” Okowa said and went further to articulate some of the features that qualifies a political system to include; acceptable and legitimate division of powers among deferent tiers of government, a written constitution delineating such division, the coordinate supremacy of the levels of government with regard to their respective functions and a considerable measure of autonomy of the federal Government and the federating units.

“In the Federal Structure of Governance in Nigeria, there are three tiers upon which the powers of government are shared. These are Federal, State and the Local Governments. However, the Local Governments are today not independent. In law as provided in the constitution, they are created by the State Governments as administrative units which can best facilitate development in the area.

“However, this provision which also requires the National Assembly and the Presidency to ratify the creation of Local Government Areas as administrative units is an aberration in the context of true federalism. Hence, we propose that this practice be terminated in the envisaged new constitution.

“Consequently, we hereby recommend the deletion of Section 9 of the Constitution which vests this consequential power on the National Assembly.

“As a corollary, we further recommend the delisting of the existing local Government areas from the Constitution as contained in Part 1, first schedule thereof. In the proposed new constitution, States should have exclusive power to create local governments purely as administrative units and through their Houses of Assembly, enact laws on the allocation of revenue to the local governments for the development of the area,” Governor Okowa briefly stated on the position of the people and Government of Delta State amongst other.

In his remarks, the Deputy Speaker of the House of Representatives and Chairman of the House Special Committee on Constitution Review, Rt. Hon. Ahmed Idris Wase encouraged Nigerians to participate actively in the ongoing Public Hearing and assured that the Committee will do justice to their presentations.

“This is a golden opportunity for us to write our names in gold, so that we will give a stable Nigeria a document to work with. So on behalf of the Speaker, my other colleagues who are not here, I want to assure you that by the grace of God, we shall only do those things that will promote the unity, happiness and prosperity of Nigeria, the Deputy Speaker assured, even as he appealed on members of the Committee to be fair and tolerate every Nigerian that are out to present position papers at the public hearing.

Earlier in his welcome address, the Minority Leader of the House of Representatives and Chairman, South South zone public hearing, Asaba Centre, Rt. Hon. Ndudi Elumelu said that the public hearing was a direct response by the 9th National Assembly to the aspiration and demand by Nigerians for an urgent amendment to certain fundamental provisions of the 1999 Constitution towards guaranteeing a peaceful, socially cohesive, politically stable and economically viable nation.

Elumelu said that to ensure the greater participation of the people in the exercise, the public hearing has been brought closer to them, through a sub-zonal arrangement that allows citizens  easy access to participate in the amendment process, saying that the South-South Sub-zonal cluster, Asaba centre, covers Delta, Edo, and Bayelsa State.

“The convergence of our leaders and citizens from the three states that make up this cluster, underscores the urgency and significance the people of the states; the people of the Niger Delta region and indeed Nigerians at Large, attach to this exercise.

“As we go into this exercise, we must bear in mind that every democratic constitution is made by the people for the fulfillment of their collective aspirations, dreams and objective as a society.

“Consequently, any constitution that does not guarantee the fulfillment of such aspirations is to the extent of such shortcomings, defective, frustrating and cannot deliver benefits to the people. Instead, such constitutions breed discontentment dissonances, agitations, violence, restiveness, economic retardation and political frictions,” the Minority Leader noted and said that the current 1999 (as amended) has been adjudged by many as being replete with grave defects which are frustrating the practice of a federal system that most Nigerians desires.

According to the renowned federal lawmaker, “the solution lies in addressing such defects through statutory amendments to reflect the prevailing wishes, aspiration and demand of the people”.

“Across our country today, and of course, in the Niger Delta Region, there are firm and loud demands for urgent amendment of key sections of our constitution to restructure governance along the line of true federalism to guarantee the decentralization of power and resource control to sub-national units; establishment of state policing system, devolution of the electoral processes, Citizenship registration, land use control as well as equitable access to federal opportunities and appointment.

“Others are agitations for fiscal and operational autonomy for local government as well as legislative and judicial arms of government at all levels. Across the Niger Delta region, there have been demands that the Federal Government should completely relinquish ownership, control and management of oil and gas resources situated in the various states of the region.

“As a critical stakeholder in the Niger Delta, I have witnessed firsthand, the challenges that lead to such agitations. These include the agonizing poverty and lack, unemployment, disregard to demands for local content in employment and other opportunities that abound in the oil and gas sector, oil spillage and environmental degradation, decayed infrastructure and painful neglect, despite the huge economic resources coming from the region.

“This situation has led to anger, restiveness and avoidable violence. The voice of Nigerians in the Niger Delta region has become un-mistakenly loud and it is my belief that the time has come for us to address these vexed issues and ensure a more stable and productive nation, through the desired constitution amendment.

“This public hearing therefore offers a voice as well as an ear to the aspiration of the people. Of course, any system that ignores such loud voice from the citizens is doing so as at its own peril. 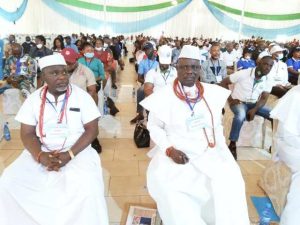 “It is however imperative to state that nothing in this exercise gives room for any question on the unity and corporate existence of Nigerian as one indivisible nation. The public hearing and desired amendment to the constitution, rather than detract from our national cohesiveness, are aimed at consolidating on our national unity by ensuring a stronger federal system with greater participation of citizens in governance at all levels,” Elumelu stated while urging all stakeholders and participants to come up with progressive submission and recommendations that will engender stronger national unity and greater productivity.

“We desire suggestions that will bring clarity to the concept of restructuring as being demanded. What items should be devolved from the Exclusive Legislative List to the Concurrent List? What is acceptable resource control and revenue sharing prescription with regard to the agitations of sub-national units under a fiscal federalism?

“Are there items that should be under the exclusive control of state and even local government? What provisions are more appropriate for resource producing communities?

“On elections; what type of decentralized electoral system is desirable in ay federal system like ours? Which elections should be under the state and which should be under federal purview? What is the role of the armed forces in our elections? 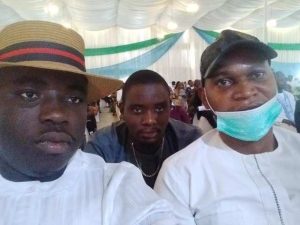 “Furthermore, what are the practical modalities for acceptable state policing, civil service system, land use, control and ownership; judiciary Jurisdiction, taxation and other subjects of agitation among sub-national unit?,” He questioned and said that they were serious issues that require concerted consideration.

Elumelu assured the Leaders and critical stakeholders of the region of the commitment of the 9th National Assembly towards the aspiration of Nigerians in the current constitution amendment exercise and want further to pledged towards working in conjunction with his colleagues from the Niger Delta extraction, in engaging other members of the House of Representatives to ensure the realization of the wishes and aspiration of the People of the Niger Delta.