Speaking at the grand occasion, Governor Okowa who was at the event with his Deputy, Barr. Kingsley Otuaro, restated his commitment to the pact with Ndokwa Neku Union led by Brig-Gen. Mike Ndubuisi (retd), to give more attention to the area.

He said that he was praying for an Ndokwa man to occupy a prime position in the next political dispensation in the state and commended the people for making a bold statement with the reception for their son.

“Let me assure you that all I agreed with the leadership of Ndokwa-Neku Union when they visited me recently I will execute all the agreements.

“Above all that, it is my prayer and I am praying everyday that an Ndokwa person will occupy a prime position in the next dispensation.’’

At the event, hundreds of members of the All Progressives Congress (APC), led by former Deputy State Chairman of the party, Chief Terry Otuya, defected to the PDP.

Receiving the defectors, Chairman of PDP in the state, Chief Kingsley Esiso, described APC as “noise makers” and vowed to chase them out of Delta.

“They are free to make their noise but they are aware that when the chips are down they cannot stand the PDP machinery in Delta.

“I doubt their capabilities; so, don’t believe their promises; they are all lies. How can anybody truly called a Deltan be deceived by that party called APC?

“Today, Nigeria is now the poverty headquarters of the world because of APC’s poor leadership in the nation.

“They can do whatever they like anywhere particularly, Abuja, but let them know that Delta is a no-go-area for them,’’ he said.

“We will defeat him in the nine local governments of Delta North.”

Chairman of the occasion, Admiral Mike Onah (retd), in his remarks, said that Ndokwa nation was grateful to the PDP for appointing their son as State Secretary.

He urged him to work hard to leave a legacy that Ndokwa nation and Delta State would be proud of.

On her part, a former Presidential Adviser, Dr Esther Uduehi, said Ndokwaland was united for the PDP and urged the people to remain resolute for the party in the area.

Speaking on behalf of the APC defectors, Chief Otuya, said they that all of them agreed to dump the APC because the party lacked leadership and direction.

“We the erstwhile members of the APC hereby dump our brooms and we have all agreed to embrace the PDP.

“We built the PDP in 1999 and we have only been on sabbatical. We used to be PDP’s albatross but now that we are back at home, we will work harder to ensure victory for the PDP, going forward,’’ he said.

In a vote of thanks, Ossai expressed gratitude to Governor Okowa and the party for finding him worthy to serve, and assured that he would do his best to uplift the party in the state. 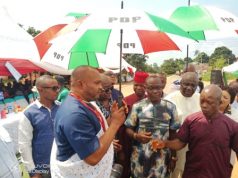 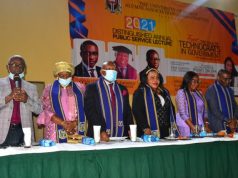 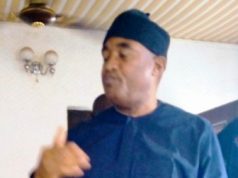