It was atmosphere of joy and gratitude to God Almighty, on Saturday July 3, 2021, when the Board and Management of the Pilgrim Baptist Hospital, Issele-Uku, gathered with the Leadership of the Pilgrim Baptist Association, to mark and celebrate one year anniversary of the hospital after its reactivation last year. 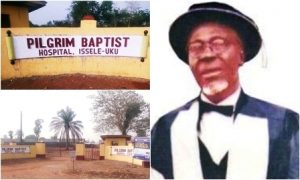 The event, attended by the Moderator and Spiritual Leader of the Pilgrim Baptist As so it i on, Rev’d Moses Ekene Okolie was held at the premises of the Hospital and chaired by Elder Edwin Ozoma who also is the Chairman of the Hospital Management Board.

Pilgrim Baptist Hospital, Issele-Uku, founded by the late Rev’d Dr. S.W. Martin in the late 60s provided high class medical services to a greater part of people in Edo and Delta State for many years before it went down in the late 90s.

It was however, rehabilitated through the assistance of the Delta State Government and re-commissioned by the State Governor, Senator Dr. Ifeanyi Okowa on Saturday February 22, 2020, after so many years of inactivity. 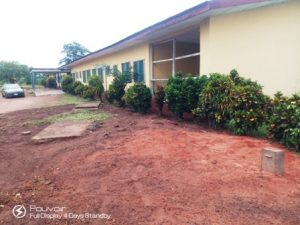 The anniversary celebration which was also attended by the vice moderator of the Pilgrim Baptist Association, Rev’d Gabriel Okpala, the secretary, Pastor Favour Ndugbu and representatives of the local Churches under the Pilgrim Baptist Association, was an opportunity for the Elder Edwin Ozoma led Hospital Management Board to give account of their stewardship since the reopening of the hospital.

Speaking at the brief, but impressive ceremony, the Moderator and Spiritual leader of the Association, Rev’d Moses Ekene Okolie who was visibly elated, expressed his deep appreciation to the Lord God Almighty in praise and worship, saying that it was God and Him alone that used the Governor, Senator Dr. Ifeanyi Okowa and the rehabilitation committee under the able and shrewd leadership of Elder Edwin Ozoma to bring about the resuscitation and sustenance of the hospital.

“What Shall I Say Unto the Lord?

All I have To Say, Is Thank You Lord.

All I Have To Say,

Is Thank You Lord,” he sang.

Rev’d Okolie said that the song was in fulfillment of the vow they made at the inception that ‘if the Lord God leads us and sees us through the rehabilitation, reopening and sustaining the operations of this hospital, we will come together for thanksgiving.”

“Today, I am so glad that the hospital Board allowed themselves to be used for the realization of the intent and purposes of God concerning this hospital.

“indeed, it was a huge challenge, quite alright, but when we are calling on our brothers for this assignment, we had faith that by the grace of God, the Lord will use them to do something and call the hospital back to life and thank God that our faith did not fail us. We are saying thank you Lord.

“We are specially appreciating the Chairman and members of the Hospital Management Board for the fact that we witnessed the daunting challenges they faced on the cause of rehabilitating this hospital. They did everything, even beyond their limit to ensure and bring about the success we are celebrating today.

“I sincerely appreciate the Chairman, our brother, Prince Ibe Edwin Ozoma for your godly leadership which saw us through. We prayed that testimonies would come out from your efforts and today we are testifying. We will continue to appreciate you and members of your committee and the Board.

“The good things you have done which were well explained and listed in your report, most especially, your selfless services through your Money and time, I appreciate the Board, Management and staff immensely, on behalf of Pilgrim Baptist Mission/Association. Our Prayer is that God will bless and keep you.

“As we are appreciating you, we are in the same vein, appealing to you all, to keep on with the good work. We still believe there are many grounds to cover and we believe God will use you also to cover these grounds,” Rev’d M.E. Okorie said.

Earlier In his report, Elder Edwin Ozoma who also headed the 6-Man Hospital Rehabilitation Committee, gave a detailed testimony on the journey towards the rehabilitation and eventual reopening of the hospital for full medical services, saying that it was indeed, a tedious assignment, but for God who was on their side, they came out successful.

“The clearing, repairs, reconstruction, renovation e.t.c were carried out by the committee, besides the infrastructure work done within the premises, and the following were carried out: setting up of the various departments such as the lab, the pharmacy, nursing unit, the theater, hiring of the staff, purchases of drugs for the pharmacy and the reagents for the lab as well as purchases of the lab, pharmacy, theater and nursing equipments,” he stated

Elder Ozoma noted that the re-commissioning of the Hospital by the State Governor, Senator Dr. Ifeanyi Okowa was heralded with a 2day free surgical and medical treatment exercise with over 800 patients benefitting.

While stating that the Pilgrim Baptist Hospital Management Board was constituted and inaugurated with him as the Chairman, on July18, 2020, Elder Ozoma listed in details, the efforts of the Board in four categories to include; Infrastructure, Equipments, Consumables and Staffing, where he explained that the committee engaged the services of other medical professionals to hire its first set of staff.

As part of his numerous assistance and support to the rehabilitation effort, Elder Ozoma in conjunction with his wife, donated over five million naira which the committee spent in the re-construction of the Doctor’s quarters, from the roof down to the floor and converted it to a beautiful two apartments for the accommodations of two doctors. 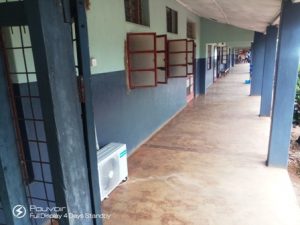 “It has not been easy for the Board getting this hospital on its feet once again, to the glory of God, it has come to stay. It is important to note that the Association and the Moderator gave the Board free hands to operate.

“Pilgrim Baptist Hospital Issele-Uku, has come to stay. It is the only hospital in Aniocha North that can boast of having two medical doctors on ground, a functioning laboratory, fully equipped pharmacy, an operation theater, a new incinerator and the best patient ward; our medical team is superb.

“We are building the reputation as the best hospital in the Local Government Area, to the glory of God, today we are next to none.

Highpoint at the inspiring event, was prayers offered for the hospital, board, management and Staff by the Vice Moderator of the Association, Rev’d Gabriel Okpala as well as a guided tour of the hospital facilities, superintended by the Board Chairman, Elder Edwin Ibe Ozoma.

My Constituents’ Well-being Remains Paramount To Me, Says Hon Nwaobi