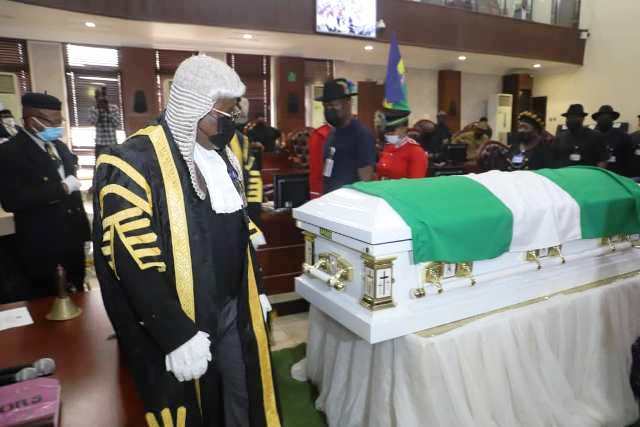 The Delta State House of Assembly Thursday 15th July, 20221, held a valedictory session in honour of its late former Speaker and one time Acting Governor of the State, Rt. Hon. Sam Obi.

Speaker of the State House of Assembly, Rt. Hon. Sheriff Oborevwori presided over the special sitting and it was attended by former Speakers and members of the House, the wife and family members of Rt. Hon. Sam Obi. 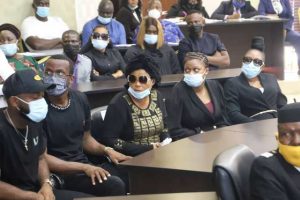 In his Valedictory speech, the Speaker of the Delta State House of Assembly, Rt Hon Sheriff Oborevwori, lamented the demise of the former speaker of the House, Rt Hon Prince Sam Obi and said that his demise was never Contemplated.

Oborevwori who was emotional in his speech, said that it was with heavy heart that he sat to preside over the Valedictory session of “our fallen former speaker of the House, His Excellency, Rt Hon Prince Sam Obi.

“This is even more painful knowing that the late Hon. Speaker once sat in this same position to preside over the House in Plenary. I must confess that his demise was never contemplated at this time. This is rather the sun setting at noon. May his gentle soul rest in peace.

“Honourable Colleagues, from the tributes and testimonies I have read and heard since the passing of the former Speaker, it seems to me that the late Honourable  Speaker knew his vision very early in life and chose to serve humanity and God from the very beginning. His political trajectory and his relationship with God are loud testimonies to this fact”, he stated. 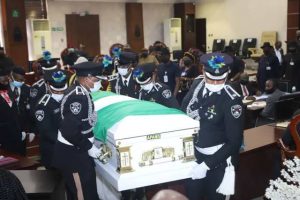 The late former Speaker, he said, was a man that believed in incremental progress in the journey of life, saying that he began his political career as a Councillor and rose  steadily to become the Speaker of the House and eventually an Acting Governor of the State in 2010.

“Rt. Hon. Prince Sam Obi represented Ika North East State Constituency in the House from the 3rd to the 5th Assembly (2003 – 2015). He became the Speaker of the House on 29th July, 2010 to June 2011. As the 9th Speaker of the House in the Fourth Assembly, he left his mark in the history books of the Delta State House of Assembly.

“As Member representing Ika North East, he was a shining light as he demonstrated uncommon capacity and knowledge at Plenary. He was a delight to behold when marshalling out his debates on the floor of the House. He was critical in his approach to issues, very engaging and robust in making his point.

“He has to his credit as a sponsor/ co-sponsor the following bills: Delta State Institute of Continuing Education Bill, 2008; Pension Reform (Amendment) Bill, 2009; and Delta State Anti-kidnapping and Anti-Terrorism Bill, 2012”, he said.

“Prior to his election as a Member of the House,  Rt. Hon. Sam Obi was elected as Councillor and Chairman of Ika North East Local Government Council. He was also Chairman, Board of Directors of the Pointer Newspaper. His visions for the Newspaper are still reference points till this day”.

“With the several positions of privilege he occupied during his lifetime, he remained meek, gentle and compassionate about the welfare of others. Rt. Hon. Sam Obi was kind with praises whenever anyone did well and also quick to rebuke for not doing well. He has a good heart for laughter but firm and decisive in decision making”, Rt Hon  Oborevwori said. 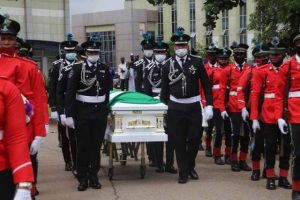 “Sadly, we are today talking about Rt. Hon. Prince Sam Obi in past tense. My heart bleeds. His passing is not only a loss to his family but to all Deltans. Delta State has lost a political leader with rare grace”, he added.

While extending his heartfelt condolences to the wife and children, the Speaker urged all and sundry to remember those he left behind in their prayers for God to give them the fortitude to bear the huge loss.

In his tribute, the Deputy Speaker of the State House of Assembly, Rt Hon Ochor Christopher Ochor said that; “I will miss him greatly and I wish him safe journey home to his creator”.

The Chief Whip, Hon (Evang) Princess Pat Ajudua, stated that; “He was very close to me. We have lost a good man. He was a fulfilled man. We are going to miss him greatly”.

The Minority Leader of the House, Hon Anidi Innocent, posited that; “We are going to miss this great leader of our time”.

On his part, the Deputy Chief Whip, Hon Solomon Ighrakpata, said that; “Death has cut short the life of a good man. He was a great man and a wonderful leader”.

The Deputy Majority Leader, Hon Kenneth Oboro Preyor, described his death as a painful one.

The Majority Whip of the House and member representing Ika South State Constituency, Hon Festus Chukwuyem Okoh said that; “Ika nation has lost a wonderful man and a great leader and we are going to miss him”.

Hon Martins Alfred, the member representing Warri North State Constituency stated that;  “His death is a big blow, we are going to miss him.”

Hon Anthony Elekeokwuri, the member representing Ika North State Constituency on his part said that;  “It is difficult for me and people of Ika nation to really believe that we are gathered here today to mourn a great man. He was well known in the Ika nation. He was a great friend. When I look at his family, I know that Rt Hon Prince Sam Obi is still alive. God will wipe the tears of his family and there will be no more early death in his family”.

The member representing Ughelli South State Constituency Hon Izeze Rume Yakubu Reuben, noted that; “We are mourning this morning because before us here today, is a wonderful man. I had a wonderful relationship with him. He was a fearless man. He was a mentor to me. To the family he left behind; continue with the good legacy he left behind”.

Hon. Engr. Emeka Emmanuel Nwobi, the member representing Aniocha North State Constituency, said that; “I don’t really know where to start from, he meant a lot to me, he mentored me very well.  I am not really in my good frame of mind today to speak about my leader and a wonderful mentor. He was a very fearless man. He was an intellectual warehouse. I did not know that he will die so soon, but I know that he will make heaven. My dear senior brother and mentor may your gentle soul rest in perfect peace”. 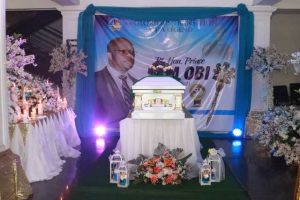 The member representing Udu State Constituency, Hon Peter Uviejitobor said his death was a painful one, saying he lived a worthy life.

Hon Charles Chukwuemeka Emetulu, the member representing Ndokwa West State Constituency said;  “We have lost a courageous man. He mentored me very well. I was shocked when I heard about his death. He was a very truthful person. He lived a meaningful life. May God stand with the family he left behind”.

Hon Austin Chika Chikezie, member representing Aniocha South State Constituency, noted that death has robbed the state of a good man, saying he got to know him when the deceased was contesting as a Chairman and “I have always taken him as a friend and a brother. He was everything”.

The member representing Ughelli North Constituency two,  Hon Eric Oharisi, said that;  “Alot has been said about him today, I wish him speedy journey home and may his gentle soul rest in perfect peace”.

Other members of the House spoke in the same vain and prayed for his gentle soul to rest in perfect peace.

Former speakers of the Delta State House of Assembly and non sitting members also paid glowing tributes to him. 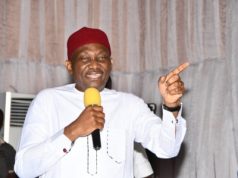