It was a great loss for the All Progressive Congress, APC, in Aniocha North Local Government Area of Delta State, on Saturday 24th July, 2021, when the National President of the Buhari/Osibanjo Youth Movement, Engr. Kelvin Uche Okolie formally defected to the Peoples Democratic Party, PDP.

The APC Chieftain, known for his massive mobilisation of youths for the election of President Muhammad Buhari in 2015 and re-election in 2019, crossed over to the PDP with over 100 members of his organization in Delta State.

Engr. Okolie’s defection which was held at ward 9 Ukwu-Nzu in grand style, was witnessed by notable leaders of the PDP in Aniocha North Local Government Area which included; the Chairman of the Party in the area, Hon. Dr. Charles Ochei, Chief Emma Eboh, Chief Emma Chinye, Chief Dan Okenye, Chief Jaunty Okwudi, Dr. Michael Nwoko, Chief Ayo Momah, Hon Princess Tina Amuamuziam, Mr. Iyka Uwagwu and members of the executive of the Party in the area amongst others.

In their remarks, the various Leaders commended the decampees for their resolve to dump the APC and noted that PDP remains a party where all shades of opinion and views are accommodated and the interest of the people adequately represented and protected.

They eulogized the State Governor, Senator Dr. Ifeanyi Okowa for being a proactive leader of the party that has continued to demonstrate uncommon passion for the people through the implementation of people oriented projects and programmes, not only in Aniocha North Local Government Area, but also across the senatorial districts in the State.

The Leaders, particularly appreciated the Governor for opening up Ukwu-Nzu to the world and ensuring the appointment of so many persons from the ward into political office in the State.

While assuring Engr. Okolie and his supporters of a level playing ground in the PDP, they lauded him for taking bold step in dumping the APC and said that the Party, APC, remains a political party that is not needed in Aniocha North, even as they described PDP as an organized Party that has respect and regards for members and the people.

Engr. Kelvin Okolie and his supporters were later presented to the Chairman of the Party in the Area, Hon. Dr. Charles Ochei by a renowned leader of the party, Chief Emma Eboh, after a brief introduction of the decampees by the Chairman of the Ward.

Receiving the decampees, the Party Chairman in the area, commended them for following the right path towards endearing political experience, saying that their coming into the fold of the PDP was a welcome development, and that APC is not a party for any reasonable politician to belong to.

“Since you have decided to join the PDP, we are going to work together and there will never be a time you will regret your action. This is because in PDP we are encompassing in all our actions and dealings.

“You are joining us to move our party forward and to support our Governor, Senator Dr. Ifeanyi Okowa with others in our Senatorial district to ensure that he finishes Strong,” the Party boss said.

He commended the leaders and members in Aniocha North for coming out in their numbers for the event and said it was a show of solidarity which he noted the Party is known for in the area.

The Party Chairman later presented the Umbrella which is the symbol of the party and the Party Cards to Engr. Kelvin Okorie and members of his group.

Responding on behalf of the decampees, Engr Kelvin Okolie who was visibly elated described the event as awesome.

He said that he felt at home with his joining the PDP, stressing that he was gratified with the level of love and togetherness he observed in the Party in Aniocha North.

“Honestly, am happy with the brotherhood, the synergy and unity that exist among the leaders and members of the PDP in Aniocha North. What i have seen has confirmed that PDP is a united family with an unshakable foundation.

“I am really overwhelmed with your warm reception,” Engr. Okolie stated.

He said that his defection from the APC stem from the fact that the party does not in any way have a solid foundation and said that its foundation is like a pack of cards.

“The truth is that APC in Delta State is not functional. It is only based on personal interest and not on the People. Everyone is out for what they will immediately gain. They are not interested in representing the people.

“They are there for what to gain and not what to give out to the society. It is the amalgamation of selfish and self-centered people who are not interested in the People.

“That is why we decided to join a party with clear focus for the people, a party that I have seen sincerity, togetherness, love for the people and willingness to move the party and the people forward,” he said.

He commended the State Governor Senator Dr. Ifeanyi Okowa for the massive infrastructure development in Aniocha North and across the State and noted that the people oriented administration of the Governor propelled him and his supporters to join the PDP.

Speaking in a chat with cshowcasenews.com, the Vice Chairman of Aniocha North Local Government, Hon. Princess Tina Amuamuziam expressed joy over the success of the event, even as she commended the leadership of the party in the area for their credible representation.

She described Engr. Kelvin as a big political fish who had been a Chieftain of APC even at the top before he dumped them and joined the PDP, saying that she was happy that he was joining them in ward 9 Ukwu-Nzu to help in moving the Party forward.

“My brother, Kelvin has been in APC, he has invested a lot in APC and he was at the helm of affairs in the party, but he confessed to me and said that he has seen what the Governor is doing and that he wants to be in that train and today we have welcome him into the PDP and we are very excited and glad about it,” she said. 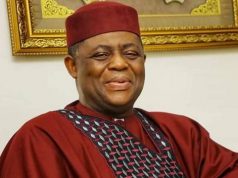 APC Gives Conditions Before FFK Can Be Fully Accepted 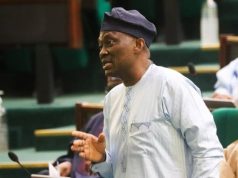 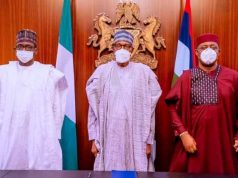 Fani-Kayode Says Buhari, APC Has Changed … As Buhari Receives Him As APC Member