Governor Ifeanyi Okowa of Delta State on Friday 30th July, 2021, concluded the inauguration of 2020 Constituency Projects, executed by the Minority Leader and member representing Aniocha Oshimili Federal Constituency in the House of Representatives, Rt. Hon. Ndudi Elumelu for his people in the federal Constituency.

Projects inaugurated which has direct bearing to the grassroots included; multiple purpose community town halls with over five hundred seating capacities in Obior, Ubulu-Okiti, Obomkpa, and Ugbodu, Information Communication Centre in Akwukwu-Ugbo, a comprehensive water borehole in Onicha-Olona, massive rehabilitation of the DSS Office structures in Issele-Uku and the construction of the phase l Onicha-Uku- Idumujei-Unor road.

With the Minority Leader during the inaugurations included; officials of the State Executive of the Peoples Democratic Party, PDP, Delta State, Honourable Members of the State House of Assembly from Aniocha Oshimili Federal Constituency that has Hon. Engr. Emeka Nwaobi, Hon. Austin Chikezie, and Hon. Ekene Rapu and notable leaders of the Constituency such as Chief Nkem Okwuofu and Chief Chris Agbabu.

Present and past Chairmen of Council’s from the Federal Constituency with their deputies, Present and past Chairmen of the PDP from the four local Government Areas within Aniocha/Oshimili, leaders and councillors from the various legislative arms and members of the executives of the four local Governments in the Constituency amongst others, were also with the Minority leader at the visits.

Inaugurating the projects on behalf of the Governor, at their various locations, Olorogun Barr Kingsley Esiso restated his commendation of the gestures of the Minority Leader in providing the projects for the services and benefits of his people, saying that Rt. Hon. Ndudi Elumelu has remain a reference point in quality representative democracy.

“It is an honour to be here on behalf of His Excellency the Governor, to commission these projects put together by our representative, Rt. Hon. Ndudi Elumelu who obviously has done very well.

“For the past three days, we have been moving from one community to the other in these federal Constituency commissioning projects. 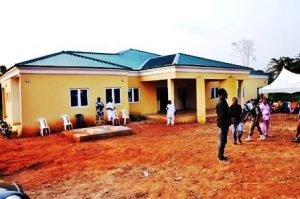 “All these projects are put together by our brother and illustrious son to serve his people and for the benefits of his people; this is surely what we called deep and excellent representation. 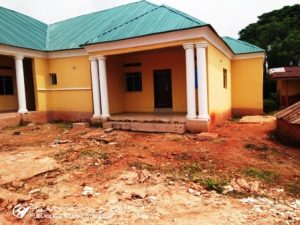 “Honourable, on behalf of the people of these communities, I want to thank you, appreciate you because I am aware that these projects are for 2020 and it means that more are on the way for the people,” the Governor’s representatives stated.

The State PDP Chairman, later spoke further while presiding over the first meeting of the PDP in one of the newly inaugurated multipurpose community town halls at Ugbodu where he encouraged the people of Aniocha Oshimili Federal Constituency to go out and register in the ongoing INEC registration exercise for them to have their voters card, saying that with their voters card they will be able to vote massively for the Peoples Democratic Party in 2023. 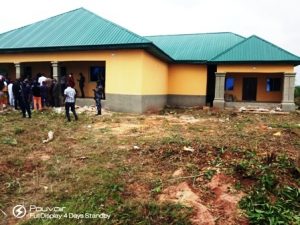 “You know without your voter’s card, you cannot vote and without it people like Rt. Hon. Ndudi Elumelu cannot go back to Abuja. It therefore means that you have to tell your Children, that are just climbing to 18 years, to go and register, get their voters card, so that in 2023 they can vote and return Ndudi Elumelu.

“Your vote is your power,” Olorogun Barr Kingsley Esiso stressed.

Earlier at the various communities, Rt. Hon. Ndudi Elumelu restated his position that the provision of the projects was in consonance with the sincere and proactive development efforts of the State Governor, Senator Dr. Ifeanyi Okowa, in the three Senatorial districts and said that Aniocha/ Oshimili has benefited immensely in all sectors, affirming that the projects commissioned are his constituency projects for the year 2020 while noting that more projects for the people has been included in the 2021 budget. 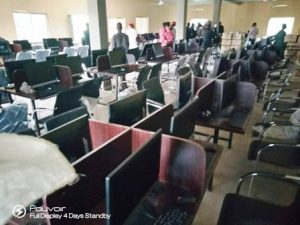 “Your Excellency, these projects are in line with all that you have been doing for our people in Delta State. You have given the people joy and for the first time you created many wards and most of our communities were positively affected by the creation of these wards and I most till that we are very grateful to You.

“And also, this morning, your Excellency, INEC came to me and said they have finally approved Aniocha North Constituency II to have election in 2023,” Rt. Hon. Elumelu revealed. 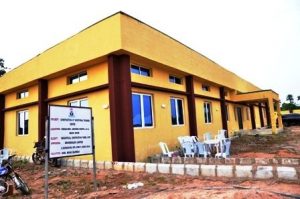 The leaders pledged their unalloyed support to all that Elumelu stands for and prayed God to give him more straight and enablement to continue to be focused in his quality representation. 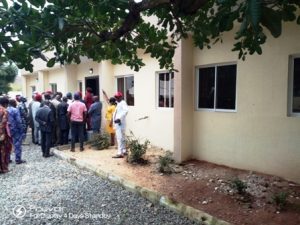 A total number of 18 Constituency Projects for 2020, executed by Rt. Hon. Ndudi Elumelu in 16 communities within Aniocha Oshimili Federal Constituency were commissioned during the three days exercise. 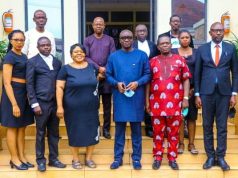 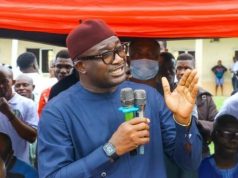 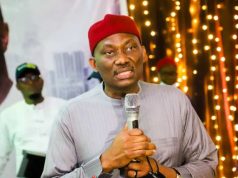 Okowa calls for efforts to keep Polio at zero level